In late December 2015 I became aware of Charlie Hides’ Blackface drag act ‘Laquisha Jonz’. It was clear that Hides’ character was based on degrading and obnoxious stereotypes of Black Working Class women. The promotional images and YouTube videos for the act incorporated every racist trope imaginable that is used to shame and oppress women like myself. Exaggerated neck rolling, finger snapping displays of “sassiness”, bad weaves, acrylic nail extensions, welfare, uncleanliness and having numerous children with “ghetto” names by different fathers. One video, which has now been removed, had Laquisha on her knees giving oral sex to a police officer. It was plain to see that Laquisha Jonz was nothing more than a minstrel show presented through a 21st century lens.
The act was a much loved, highly popular and regular feature at the Royal Vauxhall Tavern’s Sunday Social. The RVT had recently been granted a Grade II listing for it’s huge significance to the LGBTQ community so for it to be harbouring racist performances was a smack in the face to every Black LGBTQ who had supported it. 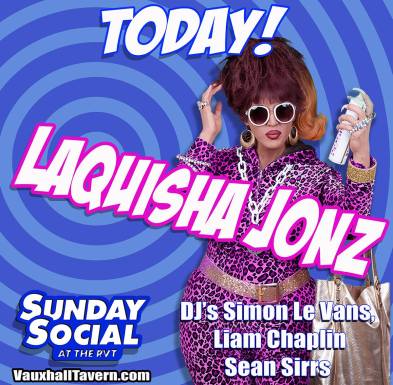 I started a campaign to stop Blackface performances at the RVT with a petition that was signed by over 1400 people. Once again a dialogue on racism in the LGBTQ community was brought to light. Initially the reaction from the RVT and some White people towards me was hostile. I received threats of violence, my Facebook page was reported and removed, and I was called derogatory names and my picture spitefully used in a meme. It was evident that many projected their own racist attitudes onto me; to them I was the embodiment of the angry Black woman stereotype. Irrational and humourless, I had a homophobic chip on my shoulder and was out to stop White gay men from having a good time.  The denial that I was a member of the LGBTQ community and was hurt and angry that my supposed queer ‘family’ thought it okay to ridicule Black women wasn’t taken into account. As has been said many times before the face of Gay Britannia is that of a White man. With many LGTBQ* rights fought for and won White gay men are taking their seats at the front of the bus and leaving their former allies at the back. This is an erasure of our history as a community where LGBTQs of colour were and still are on the front lines fighting for all of us. 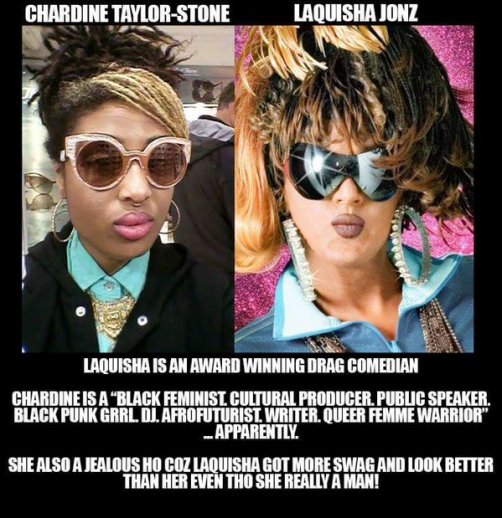 Some in the LGBTQ community hero-worship Black women celebrities as “Divas” and “Queens” but when those of us who are not on stage want to challenge the everyday racism directed towards us, those same people aggressively shut us down. The most common question that was asked of me throughout the campaign was “could I not take a joke?”. By approving Laquisha Jonz as a “comedy act” this mind-set trickles down from the stage and into our every day lives creating an environment where Black women are seen as cannon fodder for a bit of banter. This Black woman was snapped on the street by one of Laquisha’s “fans”.  How far removed is this “joke” from the racist and homophobic public harassment encouraged by right wing fascist groups? Not much.
Does the joke seem so harmless now? 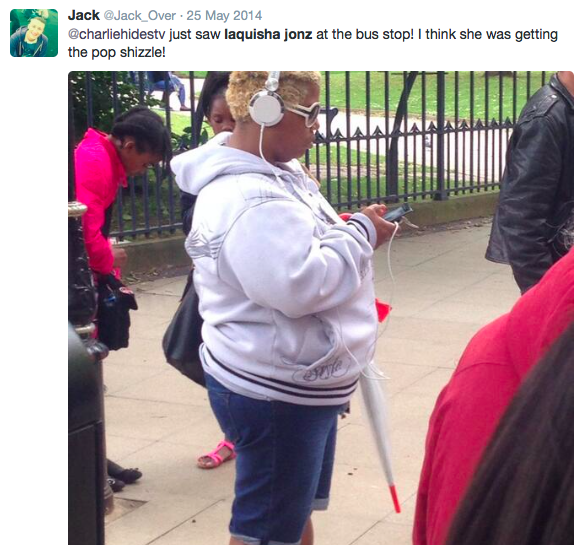 Another common response was that the act could not be racist because Charlie Hides or the RVT were not themselves racist. Rather than understanding racism as a structural and institutionalised form of oppression against people of colour, racism has come to be confused with a character flaw or name-calling. When a racist act is challenged it becomes about whether that White person is inherently racist or not. This entirely misses the point. By bringing it down to individuals and personal relationships we derail the conversations we need to have with each other that would work positively to dismantle systems of power that suppress us. People of colour often find themselves wasting time and doing much of the emotional and intellectual labour endlessly explaining this.

I could say it was shock to me that a drag artist made a living performing in Blackface at one our community’s most treasured venues but then I would be lying. Generations before me have been working to highlight racism in LGBTQ spaces for decades and yet here we are again dealing with the same ignorance that should have been left in the 1970s. In 2013 a petition was launched by LGBTQs of colour to pull a racist performance by the Queens of Pop at Manchester Pride and at the end of last year Ivan Massow’s tweet about Black activists “bleating” on about racism and suggesting that Black people are inherently homophobic and cruelly attacking gays, is just the tip of the iceberg.

White LGBTQs who are truly against racism need to step up and take ownership of what is happening in their community if we are to see any positive change. Saying to yourself “well I’m not racist this has nothing to do with me” and remaining silent is not enough. Having Black friends, partners, lovers or family does not exempt you. By remaining silent and not challenging racism when you come across it means you are part of the problem and complicit in the oppression that works against those people of colour that you claim to love and care for.

After a tumultuous fortnight of emails, twitter debates and podcasts with inspiring support from people of colour and White allies the tide began to change and as a community we started to look in the mirror at how we treat each other. Charlie Hides publically apologised on twitter and pulled the act and we began to move forward to make sure this doesn’t happen again. 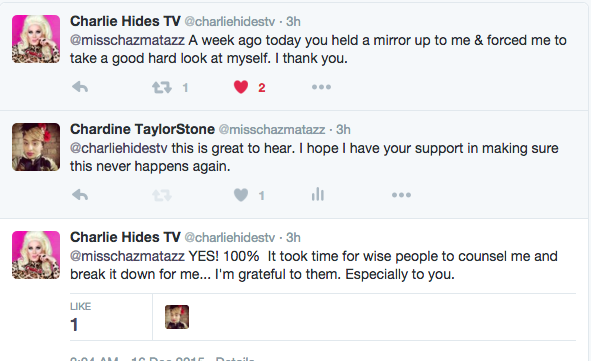 The Stop Rainbow Racism campaign is not about creating a dictatorial “safe space”, the world does not come with a trigger warning but we can make sure that all are respected and welcomed as part of our community. It’s difficult for Black promoters to find LGBTQ friendly venues so the ones we do have are extremely important. As with one bar in the Midlands, to have a situation where you have a celebration of LGBTQ* performers of colour one day and then that very same community satirized the next day is not an attempt at “diversity” but outright racism and has no place in our shared spaces.
I have received many personal messages from people of colour in small towns and cities who feel they can’t speak out against what goes on in their local gay bar for fear of being ostracized by their friendship group and local community. Is this what we really want to do those in our family, force them into silence for a few cheap laughs at their own expense?

So how can we move forward and make a positive change?
I’m now working with UK Black Pride and LGBT Underground to promote the anti-racism code of practice which I developed so that venues and promoters have a better understanding of the many forms in which racism manifests itself and sends a clear message that racist acts will not be tolerated. If you are a venue or promoter you can download the code upload it onto your website, share it on social media and join us in saying NO to Rainbow Racism.